Windows Presentation Foundation (WPF) is one of the major extensions of .NET Framework 3.0 WPF is a new library to create the Ul for smart client applications, While the Windows Forms controls are native Windows controls that use Window handles that are based on screen pixels, WPF is based on DirectX, The application does not use Window handles. It is easy to resize the Ul, and it supports sound and video.

The main topics of this chapter are, as follows:

One of the big features of WPF is that work can be easily separated between designers and developers. The outcome from the designer’s work can directly be used by the developer, To make this possible, you need to understand XAML. The first topic of this chapter gives you an overview of WPF,including enough information to understand the principles of XAML. It also covers information on how designers and developers can cooperate. WPF consists of several assemblies containing thousands of classes. So that you can navigate within this vast number of classes and find what you need, the overview explains the class hierarchy and namespaces in WPF.

XML for Applications Markup Language (XAML) is an XML syntax used to define the hierarchical structure of the user interface. In the following line, you can see the declaration of a button named buttonl with the content Click Me!. The <Button> element specifies the use of the Butt on class:

There’s always a .NET class behind an XAML element. With attributes and child elements, you set the value of properties and define handler methods for events.

To test simple XAML code, you can start the utility XAMLPad.exe (see Figure 34-1) and enter the XAML code in the edit field. You can write the <Button> element within the <Page> and <Grid> elements that are already prepared from XAMLPad. With XAMLPad, you can see the XAML outcome immediately. 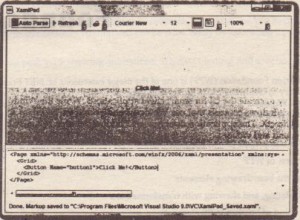 XAML code can be interpreted by the WPF runtime, but it can also be compiled to BAML (Binary Application Markup Language), which is done by default by Visual Studio WPF projects. BAML is added as a resource to the executable.

Instead of writing XAML, you can also create a button with C# code. You can create a normal C# console application, add references to the assemblies Windows Base, Presentation Core, and Presentation Framework, and write the following code. In the Main () method, a window object from the namespace System. Windows is created, and the property Title is set. Then a Button object from the namespace System. Windows . Controls is created, the Content is set, and the Content of the window is set to the button. The Run () method of the Application class is responsible for processing Windows messages: 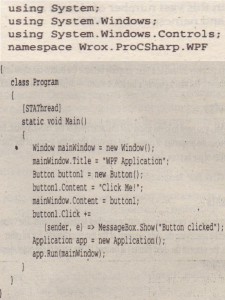 Running the application, you get a Window containing the button, as shown in Figure 34-2. 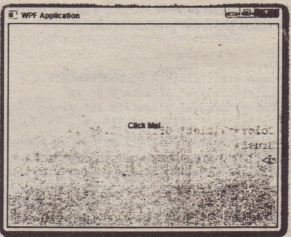 As you can see, programming WPF is very similar to Windows Forms programming – with the small difference that the Button has a Content instead of a Text property. However, compared to creating the VI forms with code, XAMLhas some great advantages. With XAML,the designer and developer can cooperate much better. The designer can work on the XAMLcode and design a stylish VI, while the developer adds functionality from the code behind using C#. It’s much easier to separate the VI from the functionality by using XAML.

You can directly interact with the elements that are defined with XAML from the C# code using code behind and XAML.You just need to define a name for the element and use the same name as a variable to change properties and invoke methods.

The button has a Content property instead of a Text property because the button can show anything, You can add text to the content, but also a graphic, a list box, a video – whatever you can think of.

Before working with XAML, you need to know important characteristics of the XAML syntax. You can use XML attributes to specify the properties of classes, The example shows the setting of the Content and Background properties of the Button class:

In the previous example, it is not necessary to use child elements.By using XML attributes, the same result was achieved, However, using attributes is no longer possible if the value is more complex than string. For example, the background can be set to not only a simple color but also to a brush, For example, you can define the following linear gradient brush:

With WPF, the class Dependency object is very high in the hierarchy. Every WPF element is derived from this base class.

A WPF element can also get features from the parent element. For example, if the Button element is located inside a Canvas element, the button has Top and Left properties that are prefixed with the parent element’s name. Such a property is known as attached property:

Writing the same functionality from the code behind is a bit different because the Button class doesn’t have a Canvas. Top Canvas, Left property, even if it is contained within the Canvas class, There is a naming pattern for setting attached properties that is common with all classes. The class supporting attached properties has static methods with the names Set<Property> and Get<Property>, where the first parameter is the object that the property value is applied to. The Canvas class defines the static methods SetLeft () and SetTop () to get the same result as in the XAML code shown earlier. 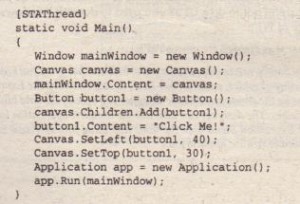 Instead of using the markup extension, you can write the same thing using child elements:

Markup extensions. are mainly used ‘for accessing resources and for data binding.

Cooperation of Designers and Developers

Very often, developers not only implement Windows applications, but are also responsible for the design, This is especially true if the application was built just for in-house use, If someone with UI design skills was hired to design the UI usually the developer is given a JPG file of the designer’s vision of how the UI should look, The developer then has the problem of trying to match the designer’s plans, Even simple changes by the designer, such as a different look for list boxes or buttons, can lead to a huge investment using owner-drawn controls, As a result, the UI done by the developer looks very different from the VI that was originally designed.

Of course, it is also possible to start the application with Visual Studio and enhance the UI later With Expression Blend, You just need to be careful not to do a UI as you used to do with Windows Forms because this doesn’t take full advantage of WPF.

Figure 34-3 shows Expression Blend that was created by using WPF. 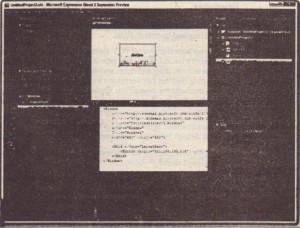 WPF consists of thousands of classes with a deep hierarchy To help in understanding the relationship among the classes, Figure 34·4 shows some of the WPF classes in a class diagram, Some classes and their functionality are described in the following table. 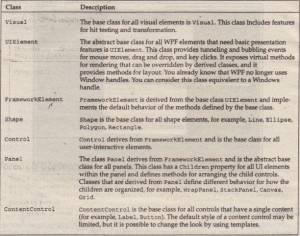 As you can see, WPF classes have a really deep hierarchy. In this and the next chapter, you will see classes of the core functionality but it is not possible to cover all the features of WPF. 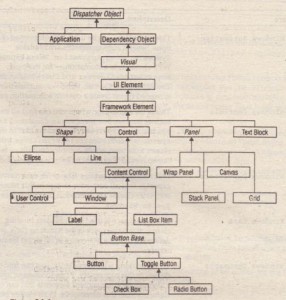 Namespaces and their functionality with WPF are described in the following table. 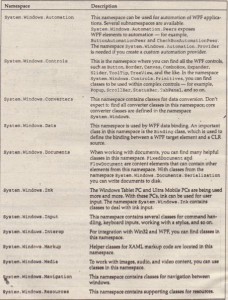