What Are Assemblies? C# Help

Assemblies are the deployment units of .NET applications .. NET application consist of one or more assemblies .. NET executables with the usual extension EXE or DLL are known by the term assembly. What’s the difference between an assembly and a native DLL or EXE? Though they both have the same file extension, .NET assemblies include metadata that describe all the types that are defined’in the assembly with information about its members – methods, properties, events, and fields.

Assemblies are self-describing installation units, consisting of one or more files. One assembly could be a single DLL or EXE that includes metadata, or it can be made of different files, for example, resource files, modules, and an EXE.

The features of assemblies can be summarized as follows:

the assembly metadata, type metadata, MSILcode, and resources are all in one file – Component. dll. The assembly consists of a single file. 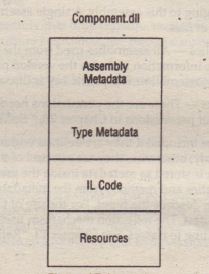 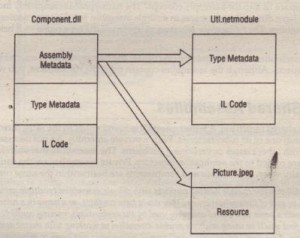 An important part of an assembly is a manifest, which is part of the meta data. It describes the assembly with all the information that’s needed to reference it and lists all its dependencies. The parts of the manifest are as follows:

You might be a little bit confused by the meanings of namespaces, types, assemblies, and components. How does a namespace fit into the assembly concept? The namespace is completely independent of an assembly. You can have different namespaces in a single assembly, but the same namespace can be spread across assemblies. The namespace is just an extension of the type name – it belongs to the name of the type.

When using shared assemblies, you have to be aware of some rules. The assembly must be unique and therefore must also have a unique name called a strong name. Part of the strong name is a mandatory version number. Shared assemblies will mostly be used when a vendor, different from that of the application, builds the component, or when a large application is split into sub projects. Also, some technologies such as .NET Enterprise Services require shared assemblies in specific scenarios.

Assemblies can be viewed using the command-line utility ildasm, the MSIL disassembler. You can open an assembly by starting ildasm from the command line with the assembly as an argument or by selecting the File ~ Open menu.

it shows ildasm opening the example that you build a little later in the chapter, SharedDemo . dll. ildasm shows the manifest and the SharedDemo type in the CSharp. Assemblies . Sharing namespace. When you open the manifest, you can see the version number and the assembly attributes, as well as the referenced assemblies and their versions. You can see the MSIL code by opening the methods of the class. 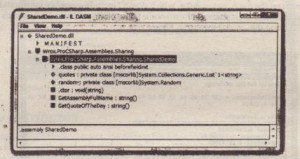 In addition to using ildasm. the .NET Reflector is another great tool to use to analyze assemblies. The .NET Reflector allows type and member search, and call and caller graphs, and decompiles IL code to C#I, CH, or Visual Basic. You can download this tool from www.aisto.com/roeder /dotnet.

Using the DOM In .NET
Assemblies