You will notice that querying a static XML document using LINQ to XML takes almost no work at all, The following example makes use of the hamlet. xml file and queries to get all the players (actors) that appear in the play, Each one of these players is defined in the XML document with the <PERSONAL> element: 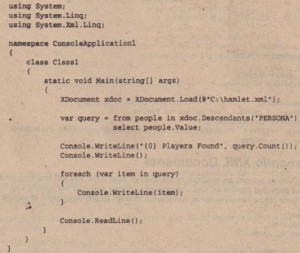 In this case, an XDocument object loads up a physical XMLfile (hamlet .xml) and then performs a LlNQ query over the contents of the document: var query = from people in xdoc.Descendants(“PERSONAL”) select people. Value;
The people object is an object that is a representation of all the <PERSONAL>elements found in the document. Then the select statement gets at the values of these elements. From there, a Console WriteLine () method is used to write out a count of aU the players found using query. Count ( ).

Then, each of the items is written to the screen in a foreach loop. The results you should see are presented here:
26 Players Found
CLAUDIUS,king of Denmark.
HAMLET,son to the late king, and nephew to the present king.
POLONIUS, lord chamberlain.
HORATIO,friend to Hamlet.
LAERTES, son to Polonius.
LUCIANUS,nephew to the king.

A lot of dynamic XML documents are available on the Internet these days. You will find blog feeds, podcast feeds, and more that provide an XML document by sending a request to a specific URL endpoint. These feeds can be viewed either in the browser, through an RSS-aggregator, or as pure XML. 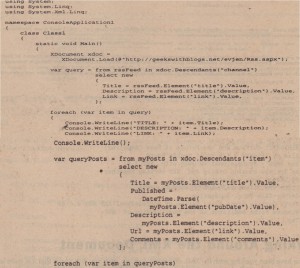 Looking at thiscode, you can see thatthe Load () method offof the XDocument objectpoints to a URL where the XML isretrieved.The firstquery pulls out allthe main sub-elements of the <cacnel> element in the feed and createsnew objects called Title, Description. and Link to get at the values of these sub-elements, From there,a foreach statement is run to iterate through all the items found in this query, The results are as follows:

The second query works through allthe <i tern>elements and the various sub-elements ithas (these are all the blog entries found in the blog).Though a lotof the items found are rolledup intoproperties,in the foreach loop,only the TitIe property isused, You will see something similar to the following results from this query: