In any development language, there usually arise certain traditional programming styles. The styles are not part of the language itself but are conventions concerning, for example, how variables are named or how certain classes, methods, or functions are used. If most developers using that language follow the same conventions, it makes it easier for different developers to understand each other’s code – which in turn generally helps program maintainability. For example, a common (though not universal) convention in Visual Basic 6 was that variables that represent strings have names beginning with lowercase s or lowercase str, as in the Visual Basic6 statements Dim s Result As String or Dim str Message As String. Conventions do, however, depend on the language and the environment. For example, C++ developers programming on the Windows platform have traditionally used the prefixes psz or lpsz to indicate strings-char *psz Result; char *lps zMessage; -but on Unix machines it’s more common not to use any such prefixes: char *Result; char *Message;.

You’ll notice from the sample code in this book that the convention in C# is to name variables without prefixes: string Result; string Message;.

The convention by which valuable names are prefixed with letters that represent the data type is known as Hungarian notation I “leans that other developers reading the code can immediately tell from the
variable name when data he variable represents ..Hungarian notation is widely regarded as redundant in these days of smart Editors and IntelliSense.

Whereas, with many languages, usage conventionly evolved as the language was used, with C# and the whole of the .NET Framework, Microsoft has written very comprehensive usage guidelines, which are detailed in the .NET /C# MSDN documentation. This should mean that, right from the start, .NET programs will have a high degree of interoperability in terms of developers being able to understand code, The guidelines have also been developed with the benefit of some 20 years’ hindsight in object-oriented programming, and as a result have been carefully thought out and appear to have been well received in the developer community, to judge by the relevant newsgroups. Hence the guidelines are well worth following.

It should be noted, however, that the guidelines are not the same as language specifications. You should try to follow the guidelines when you-can. Nevertheless, you won’t run into problems if you do have a good reason for not doing so – for example, you won’t get a compilation error because you don’t follow these guidelines. The general rule is that if you don’t follow the usage guidelines you must have a convincing reason. Departing from the guidelines should be a positive decision rather than simply not bothering. Also, if you compare the guidelines with the samples in the remainder of this book, you’ll notice that in numerous examples we have chosen not to follow the conventions. That’s usually because the conventions are designed for much larger programs than our samples, and although they are great if you are writing a complete software package, they are not really so suitable for smart-line standalone
programs. In many cases, following the conventions would have shade our samples harder, rather than easier to follow .

The full guidelines for good programming style are quite extensive. This section is confined to describing some of the more important guidelines, as well as the ones most likely to surprise you. If you want to make absolutely certain that your code follows the usage guidelines completely, you will need to refer to the MSDN documentation.

One important aspect to making your programs understandable is how you choose to name your items – and that includes naming variables, methods, classes, enumerations, and namespaces.

It is initiatively obvious that your names should reflect the purpose of the item and should not clash with other names. The general philosophy in the .NET Framework is also that the name of a variable should reflect the purpose of that variable instance and not the data type. For example, height is a good name for a variable, whereas integer Value isn’t. However, you will probably feel that that principle is an ideal that is hard to achieve. Particularly when you are dealing with controls, in most cases, you’ll probably be happier sticking with variable names like confirmation Dialog and choose Employee List Box, which do indicate the data type in the name.

The following sections look at some of the things you need to think about when choosing names .

In many cases you should use Pascal casing for names. Pascal casing means that the first letter of each word in a name is capitalized: ErnployeeSalary, ConfirmationDialog, PlainTextEncoding. You will notice that essentially all of the names of namespaces, classes, and members in the base classes follow Pascal casing. In particular, the convention of joining words using the underscore character is discouraged. So, you should try not to use names like employee_salary. It has also been common another languages to use all capitals for names of constants. This is not advised in C# because such names are harder to read-the convention is to use Pascal casing throughout:

Note, however, that often it is conventional to prefix names of member fields with an underscore:

2. For names of all parameters passed to methods: 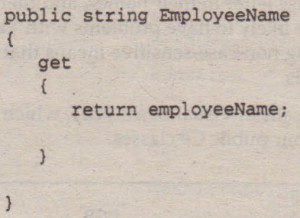 If you are doing this, you should always use camel casing for the private member and Pascal casing for the public or protected member, so that other classes that use your code see only names in Pascal case (except for parameter names).

You should also be wary about case sensitivity. C# is case sensitive, so it is syntactically correct for names in C;#to differ only by the case, as in the previous examples. However, you should bear in mind that your assemblies might at some point be called from Visual Basic .NET application dens – and Visual Basic .NET is not case sensitive. Hence, if you do use names that differ only by case, it is important t:>do so only in situations in which both names will never be seen outside your assembly. (The previous example qualifies as okay because camel case is used with the name that is attached to a private variable.) Otherwise, you may prevent other code written in Visual Basic .NET from being able to use your assembly correctly.

Namespace names are particularly important to design carefully to avoid risk of ending up with the same name for one of your namespaces as someone else uses. Remember, namespace names are the only way that .NET distinguishes names of objects in shared assemblies. So, if you use the same namespace name for your software package as another package, and both packages get installed on the same computer, there are going to be problems. Because of this, it’s almost always a good idea to create a top-level namespace with the name of your company and then nest successive namespaces that narrow down the technology, group, or department you are working in or the name of the package your classes are intended for. Microsoft recommends namespace names that begin with <CompanyName> . <TechnologyName> as in these two examples:

It is important that the names do not clash with any keywords. In fact, if you attempt to name an item in your code with a word that happens to be a C# keyword, you’ll almost certainly get a syntax error because the compiler wiIl assume that the name refers to a statement. However, because of the possibility that your classes will be accessed by code written in their languages, it is also important that you don’t use names that are keywords in other .NET languages. Generally speaking, C++ keywords are similar to C# keywords, so confusion with C++ is unlikely, and those commonly encountered keywords that are unique to Visual C++ tend to start with two underscore characters. Like C#, C++ keywords are spelled in lowercase, so if you hold to the convention of naming your public classes and members with Pascal-style names, they will always have at least one uppercase letter in their names, and there wiIl be
no nsk of clashes with C++ keywords. However, you are more likely to have problems with Visual Basic .NET, which has many more keywords than C# does, and being non-ease-sensitive means that you cannot rely on Pascal-style names for your classes and methods.

The·following table lists the keywords and standard function calls in Visual Basic .NET, which you should avoid, if possible, in whatever case combination, for your public C# classes

Use of Properties and Methods

One area that can cause confusion in a class is whether a particular quantity should be represented by a property on method. The rules here are not hard and fast, but in general, you ought to use a property if something really should look and feel like a variable. This means, among other things, that:

If the item you are coding satisfies all of the preceding criteria, it is  probably a..good candidate for a property. Otherwise, you should use a method.

The guidelines are pretty simple here. Fields should almost always be private, except that in some cases it may be acceptable for  constant or read-only fields to be public. The reason is that if you make a field public, you may hinder your ability to extend or modify the class in the future.

The previous guidelines should give you a foundation of good practices, and you should also use them in conjunction with good object-oriented programming style.

A final helpful note to keep in mind is that Microsoft has been fairly careful about being consistent and has followed its own guidelines when writing the .NET base classes. So a very good way to get an intuitive feel for the conventions to follow when writing .NET code is to simply look at the base classes how classes, members, and namespaces are named, and how the class hierarchy works. Consistency between the base classes and your classes will help in readability and maintainability.

This chapter examined some of the basic syntax of C#, covering the areas needed to write simple C# programs. We covered a lot of ground, but much of it will be instantly recognizable to developers who are familiar with any C-style language (or even JavaScript).

You.have seen that although C# syntax is similar to C++ and Java syntax, there are many minor differences. You have also seen that in many areas this syntax is combined with facilities to write code very-quickly, for example high-quality string handling facilities. C# also has a strongly defined type system, based on a distinction between value and reference types. Chapters 3 and 4 cover the C# object-oriented programming features.

Objects and Types
Creating a Client with a Sink Object