With recoverable messages, it is not guaranteed that the messages will arrive in order and just once. Failures on the network can cause messages to arrive multiple times; this happens also if both the sender and receiver have multiple network protocols installed that are used by Message Queuing.

Transactional queues can be used when these guarantees are required:

The next example shows how to create a transactional message queue and how to send messages using a
transaction.

A transactional message queue is created by passing true with the second parameter of the MessageQueue Create() method. 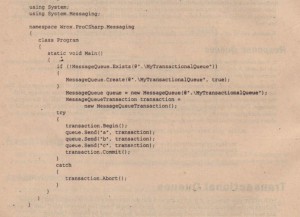 Posted on November 2, 2015 in Message Queuing