The practical significance of this is that, besides the methods and properties and so on that you define, you also have access to a number of public and protected member methods that have been defined for the Object class. These methods are available in all other classes that you define.

For the time being, we simply summarize the purpose of each method in the following list, and then, in the next section, we provide more detail about the ToString () method in particular.

You’ve already encountered ToString () in Chapter 2, “C# Basics.” It provides the most convenient way to get a quick string representation of an object.

Object. ToString () is actually declared as virtual, and all these examples are taking advantage of the fact that its implementation in the C# predefined data types has been overridden for us in order to return correct string representations of those types. You might not think that the Colors enum counts as a predefined data type. It actually gets implemented as a struct derived from System. Enwn, and Sys tern. Enumhas a rather clever override of ToString () that deals with all the enums you define.

If you don’t override ToString () in classes that you define, your classes will simply inherit the Systlilll.Object implementation – which displays the name of the class. If you want ToString () to return a string that contains information about the value of objects of your class, you will need to override it. To illustrate this, the following example, Money,defines a very simple class, also called Money,which represents U.S. currency amounts. Moneysimply acts as a wrapper for the decimal class but supplies a ToString () method. Note that this method must be declared as override because it is replacing (overriding) the ToString () method supplied by Object. Chapter 4 discusses overriding in more detail. The complete code for this example is as follows. Note that it also illustrates use of properties to wrap fields: 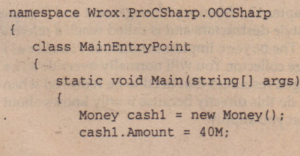 This example is here just to illustrate syntactical features of C#. C# already has a predefined type to represent currency amounts, deci~l, so in real life, you wouldn’t write a class to duplicate this functionality unless you wanted to add various other methods to it. And in many cases, due to ff>rmatting requirements, you’d probably use the String. Format () method (rather than ToString () to display a currency string.

In the Main () method, you first instantiate a Moneyobject. The ToString () method is then called, which actually executes the override version of the method. Running this code gives the following results

More From ‘Objects and Types’ Category: