Before starting to program Active Directory, you need to know how it works, what it is used for, and what data can be stored there.

The features of Active Directory can be summarized as follows:

The objects ,in the directory are strongly typed, which means that the type of an object is exactly defined; no attributes that are not specified may be added to an object. In the schema the object types as well as the parts of an object (attributes) are defined. Attributes can be mandatory or optional.

Before programming Active Directory, you need to know some basic terms and definitions.

Active Directory stores objects. An object refers to something concrete such as a user, a printer, or a network share. Objects have mandatory and optional attributes that describe them. Some examples of the attributes of a user object are the first name, last name, email address, phone number, and so on.

You can define custom types and attributes and add these to the schema, Be aware, however, that a new schema type cannot be removed from Active Directory, You can mark it as inactive so that new object cannot be created, but there can be existing objects of that type, so it is not possible to remove classes or attributes defined in the schema:

The user group Administrator doesn’t have enough rights to create new schema entries; the group Enterprise Admins Is needed for that.

A domain is a security boundary of a Windows network. In the Active Directory domain, the objects are stored in a hierarchical order. Active Directory itself is made up of one or mere domains. Figure 46-2 shows the hierarchical order of objects in a domain; the domain is represented by a triangle. Container objects such as Users, Computers, and Books can store other objects. Each oval in the picture represents an object, with the lines between the object«representing parent-child relationships. For example, Books is the parent of .NET and Java, and Pro C. Beg C,and ASP.NET are child objects of the .NET object. 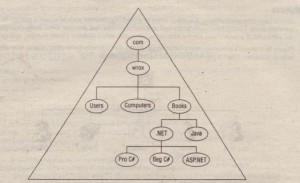 A single domain can have multiple domain controllers, each of which stores all of the objects in the domain. There is no master server, and all DCs are treated equally; you have a multimaster model. The objects are replicated across the servers inside the domain.

A site is a location in the network that holds at least one DC. If you have multiple locations in the enterprise, which are connected with slow network links, you can use multiple sites for a single domain. For backup or scalability reasons, each site can have one or more Des running. Replication between servers in a site can happen at shorter intervals due to the faster network connection. Replication is configured to occur at larger time intervals between servers across sites, depending on the speed of the network. Of course, replication intervals can be configured by the domain administrator.

Multiple domains can be connected by trust relationships. These domains share a common schema, a common configuration, and a global catalog (more on global catalogs shortly). A common schema and a common configuration imply that this data is replicated across domains. Domain trees share the same class and attribute schema. The objects themselves are not replicated across domains.

A search for an object can span multiple domains. If you look for a specific user object with some attributes, you must search every domain. Starting with csharpaid.com, the search continues to ,csharpaid. comand. csharpaid.com across slow links such a search could take a while.

To make searches faster, all objects are copied to the global catalog (CC). The GC is replicated in every domain of a forest. There is at least one server in every domain holding a GC. For performance and scalability reasons, you can have more than one GC server in a domain. Using a GC, a search through all the objects can happen on a single server.

The GC is a read-only cache of all the objects that can be used only for searches; the domain controllers must be used to do updates.

As a programmer, you are unlikely ever to configure replication, but because it affects the data you store in. Active Directory, you need to know how it works. Active Directory uses a muliimaster server architecture. Updates happen to every domain controller in the domain: The replication latency defines how long it takes until an update starts:

With a replication, only the changes are copied to the DCs. With every change of an attribute, tl version number (update sequence number or JSN) and a time stamp are recorded. These are used to help resolve conflicts if updates happened to the same attribute on different servers. .

Here’s an example. The mobile phone attribute of the user John Doe has the USN number 47. This value is already replicated to all DCs. One system administrator changes the phone number, The change occurs on the server DC1; the new USN of this attribute on the server DC1 is now 48, whereas the other DCs still have the USN 47. For someone still reading the attribute, the old value can be read until the replication to all domain controllers has occurred.

At the notification intervals, notification happens because the USN for the attribute changed, and the last time replication occurred was with a USN value of 47. The replication mechanism now detects. that the severs DCl and DC2 both have a USN of 48 for the phone number attribute. Which server is the winner is not really important, but one server must definitely win. To resolve this conflict, the time stamp of the change is used. Because the change happened later on DC2, the value stored in the DC2 domain controller is replicated.

Posted on November 2, 2015 in Directory Services