Assemblies can be isolated for use by a single application – not sharing an assembly is the default. When using shared assemblies there are specific requirements that must be followed.

This section explores the following:

The goal of a shared assembly name is that it must be globally unique, and it must be possible to protect the name. At no time can any other person create an assembly using the same name.

COM solved the first problem by using a globally unique identifier (GUID). The second problem, however, still existed because anyone could steal the GUID and create a different object with the same identifier. Both problems are solved with strong names of .NET assemblies.

A strong name is made of these items:

A shared assembly must have a strong name to uniquely identify the assembly.

A strong name is a simple text name accompanied by a version number, a public key, and a culture. You wouldn’t create a new public key with every assembly, but you’d have one in your company, so the key uniquely identifies your company’s assemblies.

For development purposes. a different public key can be used and later be exchanged easily with the real key. This feature is discussed later in the section “Delayed Signing of Assemblies.”

To uniquely identify the assemblies in your companies, a useful namespace hierarchy should be used to name your classes. Here is a simple example showing how to organize namespaces: Csharp can use the major namespace Csharp its classes and namespaces. In the hierarchy below the namespace,
the namespaces must be organized so that all classes are unique. Every chapter of this book uses a different namespace of the form CSharp. <Chapter>; this chapter uses CSharp. Assemblies. So, if there is a class Hello in two different chapters, there’s no conflict because of different namespaces. Utility classes that are used across different books can go into the namespace csharp.utilities.

A company name commonly used as the first part of the namespace is not necessarily unique, so something more must be used to build a strong name. For this the public key is used. Because of the public/private key principle in strong names, no one without access to your private key can destructively create an assembly that could be unintentionally called by the client.

A public/private key pair must be used to create a shared component. The compiler writes the public key to the manifest, creates a hash of all files that belong to the assembly, and signs the hash with the . private key, which is not stored within the assembly. It is then guaranteed that no one can change your assembly. The signature can be verified with the public key.

It shows a shared component with a public key referenced by a client assembly that has a public key token of the shared assembly inside the manifest.

The global assembly cache (GAC) is, as the name implies, a cache for globally available assemblies. Most shared assemblies are installed inside this cache; otherwise a shared directory (also on a server) can be used.

With the Assembly Cache Viewer ,you can see the global assembly name, type, version, culture, and the public key token. Under Type you can see if the assembly was installed using the native image generator. When you select an assembly using the context menu, it’s possible to delete an assembly and to view its properties. 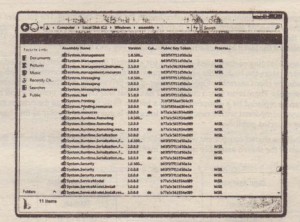 The assembly viewer can be used to view and delete assemblies with Windows Explorer. gacutil. exe is a utility to install, uninstall, and list assemblies using the command line.

The following list explains some of the gacutil options:

In the next example, you create a shared assembly and a client that uses it.

Creating shared assemblies is not much different from creating private assemblies. Create a simple Visual C# class library project with the name SharedDemo. Change the namespace to CSharp . Assemblies . Sharing and the class name to SharedDemo. Enter the following code. In the constructor of the class, all lines of a file are read into a collection. The name of the file is passed as an argument to the constructor. The method GetQuoteOfTheDay ( ) just returns a random string of the collection. 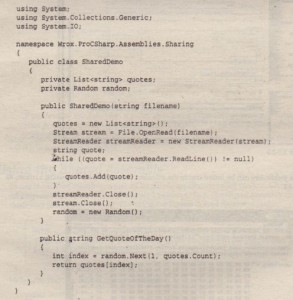 A strong name is needed to share this assembly. You can create such a name with the strong name tool (sn):

The strong name utility generates and writes a public/private key pair, and writes this pair to a file; here the file is mykey . snk.

With Visual Studio 2008,you can sign the assembly with the project properties by selecting the Signing tab, as shown in Figure 17-13.You can also create keys with this tool. However, you should not create a key file for every project. Just a few keys for the complete company can be used instead. It is useful to create different keys depending on security requirements.

Setting the signing openwith Visual Studio adds the /keyfile option to the compiler setting. Visual Studio also allows you to create a keyfile that is secured with a password. Such a file has the file extension .pfx 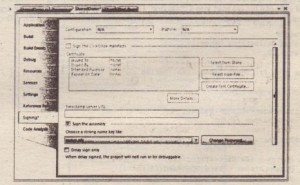 After rebuilding, the public key can be found inside the manifest. You can verify this using ildasm, as shown.

By configuring a post-build event command line with Visual Studio  the assembly can be installed in the GAC with each successful build. 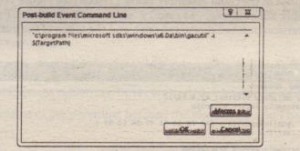 If you’re using Windows Vista to install an assembly to the GAC from Visual Studio, Visual Studio must be started with elevated rights. Installing assemblies to the GAC requires admin privileges.\

Then you can use the Global Assembly Cache Viewer to check the version of the shared assembly and see if it is successfully installed.

To use the shared assembly, create a C# console application called Client. Change the name of the namespace to CSharp. Assemblies .Sharing. The shared assembly can be referenced in the same way as a private assembly: by using the Project Q Add Reference menu.

With shared assemblies the reference property Copy Local can be set to -false to’ This way’ the assembly is not copied to the directory of the output files but will be loaded from the GAC instead.

Here’s the code for the Client application:

Looking at the manifest in the client assembly using ildasm (see Figure 17-16), you can see the reference to the shared assembly SharedDemo: . assembly extern SharedDemo. Part of this referenced information is the version number, discussed next, and the token of the public key. 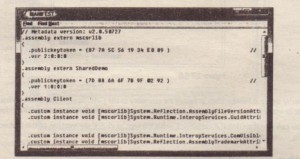 The result of your program with a sample quotes file is shown here:

The private key of a company should be safely stored. Most companies don’t give all developers access to the private key; only a few security people have it. That’s why the signature if an assembly can be added at a later date, such as before distribution. When the assembly attribute AssemblyDelaySign is set to true, no signature is stored in the assembly, but enough free space is reserved so that it can be added later. Without using a key, you cannot test the assembly and install it in the GAC; however, you can use a temporary key for testing purposes, and replace this key with the real company key later.

The following steps are required to delay signing of assemblies:

The signature verification should be turned off only during the development process. Never distribute an assembly without verification, because it would be possible for this assembly to be replaced by a malicious one.

Re-signing of assemblies can pe automated by defining the tasks in an MSBuild file.

Properties li;ts a reference count. This reference count is responsible for the fact that a cached assembly cannot be deleted if it is still needed by an application. For example, if a shared assembly is installed by a Microsoft installer package (. msi file), it can only be deleted by uninstalling the application, but not by deleting it from the GAC. Trying to delete the assembly from the GAC results in the error message “Assembly <name> could not be uninstalled because it is required by other applications.”

A reference to the assembly can be set using the gacutil utility with the option r x, The option fr requires a reference type, a reference lD, and a description. The type of the reference can be one of three
options: UNINSTALL_KEY,FILEPATH, or OPAQUE.UNINSTALL_KEYis used by MSI where a registry key is defined that is also needed with the uninstallation. A directory can be specified with FILE PATH.A useful directory would be the root directory of the application. The OPAQUEreference type allows you to set any type of reference.

installs the assembly shareddemo in the GAC with a reference to the directory of the client application. Another installation of the same assembly can happen with a different path, or an OPAQUEill like in this command line:

With ngen you can also display all assemblies from the native image cache with the option display. If you add an assembly name to the.display option you get the information about all installed versions of this assembly and the assemblies that are dependent on the native assembly:

Installing CLR 2.0 runtime also installs the Native Image Service (or the Window Service CLR Optimization Service), with the name Microsoft .NET Framework NGEN v2.0.50727 _X86. This service can be \lsed to defer compilation of native images and regenerates native images that have been invalidated.

The command ngen install myassernbly / queue can be used by an installation program to defer compilation of myassembly to a native image using the Natree Image Service. ngen update /queue regenerates all native images that have been invalidated. With the ngen queue options pause, continue, .~d status you can control the service and get status information.

You might ask why the native images cannot be created on the developer system, and you just distribute the native image to the production system. The reason is that the native image generator takes care of the CPU that is installed with the target system and compiles the code optimized for the CPU type. During installation of the application, the.CPU is known.