System. Service Model. Syndication is a new namespace with. NET 3.5 that allows you to offer data in the RSS or Atom format.

With the release of RSS version 2.0, RSS is now the shorthand notation for Really Simple Syndication. In earlier versions, it had the name RDF Site Summary and Rich Site Summary. RDF is the abbreviation for Resource Description Framework. The first version was created by Netscape to describe content of its portal site. It became successful when the New York Times began offering its readers subscriptions to RSS news feeds in 2002.Figure 48-1 shows the RSS logo. If a site shows this logo, then an RSS feed is offered.

Atom was designed to be the successor for RSS and is a proposed standard. The major difference between RSS and Atom is in the content that can be defined with an item. With RSS, the description element can contain simple text or HTML content in which the reading application does not care about this content. Atom requires that you define a specific type for the content with a type attribute, and it also allows you to have XML content with defined namespaces.

The following table lists classes from .NET 3.5 that allow you to create a syndication feed. These classes are independent of the syndication type, RSS or Atom. 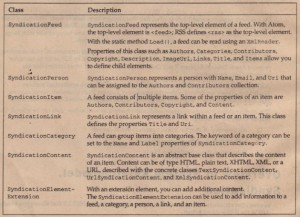 To format a feed to the RSS and Atom formats, you can use classes from the following table.

Posted on November 2, 2015 in Syndication

What Is ASP.NET AJAX?
What Is Ajax?