You see these classes in action later in this chapter when writing stored procedures and user-defined functions is discussed, but first, the following section looks into creating user-defined types with C#.

User-defined types (UDTs) can be used similarly to normal SQL Server data types to define the type of a column in a table. With older versions of SQL Server, it was already possible to define UDTs, Of course, these UDTs could be based only on SQL types, such as the ZIP type shown in the following code. The stored procedure sp_addtype allows you to create user-defined types. Here the user-defined type ZIP is based on the CHAR data type with a length of 5. NOT NULL specifies that NULL is not allowed with the ZIP data type, By using ZIP as a data type, it is no longer necessary to remember that it should be 5 char long and not null:

With SQL Server 2005 and later, UDTs can be defined with CLR classes, However, this feature is not meant to add object orientation to the database; for example, to create a Person class to have a Person data type, SQL Server is a relational data store, and this is still true with UDTs, You cannot create a class hierarchy of UDTs, and it is not possible to reference fields or properties of a UDTs type with a SELECT
statement, If properties of a person (for example, Firstname or Lastname) must be accessed or a list of Person objects must be sorted (for example, by Firstname or Lastname, it is still better to-define columns for first name or last name inside a Persons table or to use the XML data type, UDTs are meant for very simple data types. Before .NET, it was also possible to create custom data types; for example, the ZIP data type. With UDTs it is not possible to create a class hierarchy, and they are not meant to get complex data types to the database. One requirement of a UOT is that it must be convertible to a string, because the string representation is used to display the value. How the data is stored within SQL Server can be defined: either an automatic mechanism can be used to store the data in a native format, or you can convert the data to a byte stream to define how the data should be stored.

Next, you look at how to create a user-defined type. You create a SqlCoordinate type representing the world coordinates longitude and lattiude for easily defining the location of places, cities, and the like. To create CLR objects with Visual Studio you can use the visual Studio 2008 SQL Server Project (in the category Visual C#  Database). Select the Solution Explorer and add a UDT by using the User-Defined Type template, Name the type Sql Coordinate, With the template, the base functionality of a custom type is already defined:

The attribute, [SqlUserDefinedType] allows setting several properties, which are shown in the following table.

To represent the direction of the coordinate, the enumeration orientation is defined:
public enum Orientation
(
NorthEast,
NorthWest,
SouthEast,
SouthWest 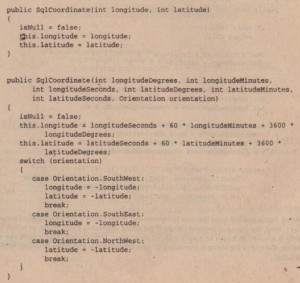 The lNullable interface defines the property IsNull, which must be implemented to support nullability, The static property Null is used to create an object that represents a null value, In the get accessor a Coordinate object is created, and the is Null field is set to true: 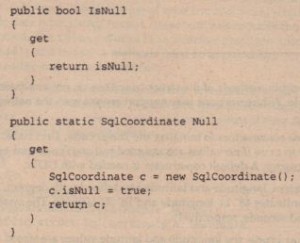 A UDT must be converted from and to a string. For conversion to a string, the ToString () method of the Object class must be overridden, The variables longitude and latitude are converted in the following code for a string representation to show the degrees, minutes, and seconds notation: 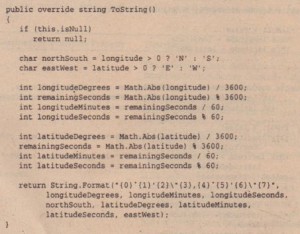 The string that is entered from the user is represented in the SqlString parameter of the static method Parse ( )  First, the Parse () method checks if the string represents a null value, in which case the Null property is invoked to return an empty Coordinate object. If the SqlString s does not represent a null value, the text of the string is converted to pass the longitude and latitude values to the Coordinate constructor: 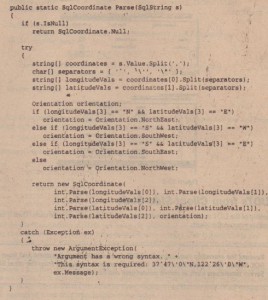 After building theassembly,itcan’bedeployed with SQL Server Configuration of the UDT in SQL Server can eitherbe done with VisualStudio 2008 usirtgtheBuild¢ Deploy Projectmenu or using these SQL commands:
CREATE ASSEMBLY Samplerypes FROM
‘c:\proCSharp\Sqlserver\PfopCsliarp.SqlTypes.dll’
CREATE TYPE Coo”rdinate EXTERNALn NAME
[ProCSharp.SqlTypesJ.[ProCSharp.Sql~es.SqlCoordinate)
With EXTERNAL NAME, the name of the assembly as well as thename of the class,including the namespace, must be set, Now, it is possible to create a table called Cities that contains the data type Sql Coordinate, as shown in Figure 30-2. 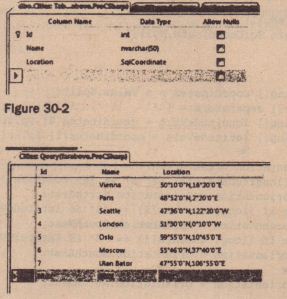 The assembly of the UDT must be referenced to use the UDT from client-side code, Then it can be used like any other type on the client.

Because  the assembly containing the UDT`S is used both from the client and from the SQL Server, it is a  good idea to put UDT`s in a separate assembly from the other SQL Server extensions such as stored procedures and functions.

In the-sample code, the SELECT statement of the Sql Corrunand object references the columns of the cities table that contains the Location column, which is of type Sql coordinate, Calling the method To String () invokes the To String () method of the Sql Coordinate class to display the coordinate value in a string format: 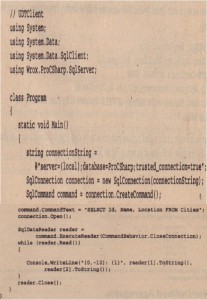 Of course, it is also possible to cast the returned object from the SqlDataReader to a SqlCoordinate type for using any other implemented methods of the Coordinate type:SqlCoordinate coordinate. (SqlCoordinate)readerI2l;
Running the application produce:’ the following output:
Vienna SO’lO’O’N,16’~O’O’E
Paris 48’S2’O’N,2’20’O’E
Seattle 47’36’O’N,122’20’O’W
London Sl’30’O’N,O’lO’O’W
Oslo S9’SS’O’N,lO’4S’O’E
Mo.cow SS’46’O’N.37’40’O’E
Ulan Bator 47’SS’O’N,106’SS’O’E
With all the great functionality of UDTs, you have to aware important restriction.

before deploying new version of UDT, the existing version must bt dropped.

This is possible only if all columns using tire type moved, Don’t plan on using UDTs for types that you change frequently.

A simple usage of the built·in aggregate AVG is shown here to return the average unit price of all products from the Adventure Works sample database by passing the ListPrice column to the AVG aggregate in the SELECT statement:

For custom value types, and if you want to do a specific calculation based on a selection of rows, you can
create a user-defined aggregate.

To write a user-defined aggregate with CLR code, a simple class with the methods Init ( ), Accumulate (), Merge (), and Terminate () must be implemented, The functionality of these methods is shown in the following table.

The code sample shows how to implement a simple user-defined aggregate to calculate the sum of all rows in every group, For deployment with Visual Studio, the attribute [SqlUserDefinedAggregate  is applied to the class SampleSum, As with the user-defined type, with user-defined aggregates the format for storing the aggregate must be defined with a value from the Format enumeration. Again, Format Native is for using automatic serialization with blittable data types.
In the code sample the variable sumis used for accumulation of all values of a group. In the Init ( ) method, the variable sum is initialized for every new group to accumulate. The method Accumulate ( ), which is invoked for every value, adds the value of the parameter to the sun: variable. With the Merge ( ) method, one aggregated group is added to the current group. Finally, the method Terminate () returns the result of a group: 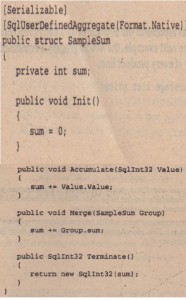 You can ust the Aggregate temple from Visual Studio to the core codeb for building the user defined aggregate, The template from Visual Studio creates a struct that uses the Sql String type as a parameter and mum type with the Accumulate and Terminate methods, You Can change the type to a type that represents the requirement of your aggregate, In the example, the SqlInt32 type isused.

Posted on October 31, 2015 in .NET Programming with SQL Server