As probably the biggest and most exciting addition to the .NET Framework 3.5 is the addition of the .NET Language Integrated Query framework (LINQ) into C# 2008.LINQ  in many flavors depending on the final data store that you are working with in querying your data. Chapter 27 took a look at using LINQ to SQL to query SQLServer databases; this chapter takes a quick look at using LINQ to query your XMLdata sources instead.

You read about the following in this chapter

Extensible Markup Language (XML)is now in widespread use. Many applications on the Internet or residing on individual computers use some form of XML to run or manage the processes of an application, Earlier books about XML commented that XML was to be the “next big thing.”

Now, IS “the big thing, In fact, there really isn’t anything bigger, Microsoft has been working for years to make using XML in the .NETworld as easy as possible “you can’t help but notice the additional capability and the enhancements to XML usage introduced in each new version of the .NETFramework. In fact, Bill Gates highlighted Microsoft’s faith in XML in his keynote address at the Microsoft Professional Developers Conference in 200 Sin Los Angeles.

He stated that XML is being pushed deeper and deeper into the Windows core each year, If you look around the .NETFramework, you will probably agree, For this reason, this chapter focuses on using LINQ to XMLto query your XMLdocuments, Figure 29-1 shows LINQ’s place in querying XMLdata.

Much of what you learned in the chapter on using LINQ to SQL can be applied here when working with LINQ to XML. 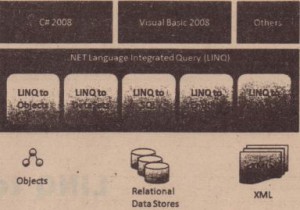