Acollection class that has no similar version with a non-generic collection is LinkedList<T>. LinkedList<T> is a doubly linked list, where one element references the next and the previous one, as shown.

Of course, there’s also a disadvantage with linked lists. Items of linked lists can be accessed only one after the other. It takes a long time to Find an item that’s somewhere in the middle or at the end of the list.

The class LinkedList<T> implements the interfaces ICollection<T>, IEnumerable<T;’, ICollection, IEnumerable, ISerializable, and IDeserializationCallback. Members of this class are explained in the following table. 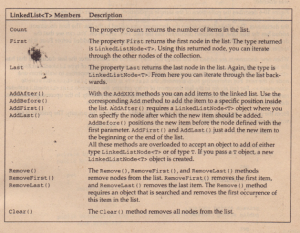 That describes the collections of the sample application. LinkedList<Document> is the linked list containing all the Documentobjects. The figure shows the title and the priority of the documents. The title indicates when the document was added to the list: The first document added has the title One, the second document has the title Two, and so on. You can see that the documents One and Four have the same priority, 8, but because One was added before Four, it is earlier in the list.

From the previous example, the’Document class is extended to contain the priority. The priority is set with the constructor of the class: 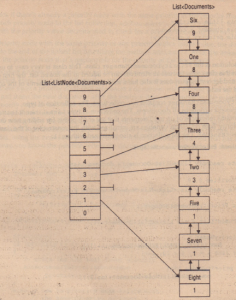 The heart of the solution is the Priority Document Manager class. This class is very easy to use. With the public interface of this class, new Document elements can be added to the linked list, the first document can be retrieved, and for testing purposes it also has a method to display all elements of the collection as they are linked in the list. 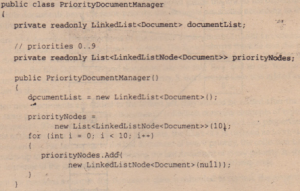 The first action that is done in the implementation of AddDocumentToPriori tyNode () is a check to see if the priority fitsin the allowed priority range. Here, the allowed range is between 0 and 9. If a wrong value is passed, an exception of type ArgumentException is thrown. 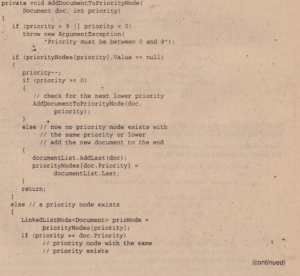 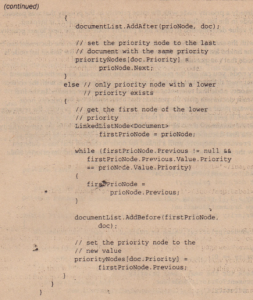 Now only simple methods are left for discussion.DisplayAllNodes () just does a for each loop to display the priorityand the titleof every document to the console».

The method GetDocument () returns the firstdocument (the document with the highest priority)from the linked list and removes it from the list:

In the Main () method, the PriorityDocumentManager is used to demonstrate its functionality. Eight new documents with different priorities are added to the linked list, and then the complete list is displayed:

With the processed result, you can see that the documents are sorted first by the priority and second by when the document was added: