When defining a class, you can use two mechanisms to automate the freeing of unmanaged resources. These mechanisms are often implemented together because each provides a slightly different approach to the solution of the problem. The mechanisms are::

The following sections discuss each of these mechanisms in turn, and then look at how to implement them together for best effect.

You have seen that constructors allow you to specify actions that must take place whenever an instance of a class is created. Conversely, destructors are called before an object is destroyed by the garbage collector. Given this behavior, a destructor would initially seem like a great place to put code to free unmanaged resources and perform a general cleanup. Unfortunately, things are not so straight forward.

The syntax for a destructor will be familiar to C++ developers, It looks like a method, with the same name as the containing class, but prefixed with a tilde (- ).It has no return type, and takes no parameters and no access modifiers. Here is an example: 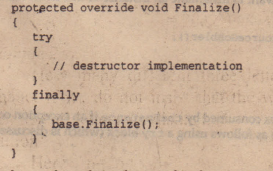 Experienced C++ developers make extensive use of destructors, sometimes not only to clean up resources but also to provide debugging information or perform other tasks. C# destructors are used far less than their C++ equivalents. The problem with C# destructors as compared to their C++ counter parts is that they are non deterministic. When a C++ object is destroyed, its destructor runs immediately. However, because of the way the garbage collector works when using C#, there is no way to know when an object’s destructor will actually execute. Hence, you cannot place any code in the destructor that relies on being run at a certain time, and you should not rely on the destructor being called for different class instances in any particular order. When your object is holding scarce and critical resources that need to be freed as soon as possible, you do not want to wait for garbage collection.

Another problem with C# destructors is that the implementation of a destructor delays the final removal of an object from memory. Objects that do not have a destructor are removed from memory in one pass of the garbage collector, but objects that have destructors require two passes to be destroyed: The first pass calls the destructor without removing the object, and the second pass actually deletes the object. In addition, the runtime uses a single thread to execute the Finalize () methods of all objects. If you use destructors frequently, and use them to execute lengthy cleanup tasks, the impact on performance can be noticeable.

Suppose that you have a class named ResourceGobbler, which relies on the use «some external resouite and implements IDisposable. If you want to instantiate an instance of this class, use it, and then dispose of it, you could do it like this:

Unfortunately, this code fails to free the resources consumed by the lnstance an exception occurs during processing, so you should write the code as follows using a try block.

This version ensures that Dispose () is always called on the lnstance and that any resources consumed by it are always freed, even if an exception occurs during processing. However, it would make for confusing code if you always had to repeat such a construct. C# offers a syntax that you can use to guarantee that Dispose () will automatically be called against an object that implements IDisposable when its reference goes out of scope. The syntax to do this involves the using keyword though now in a very different context, which has nothing to do with namespaces. The following code generates IL code equivalent to the try block just shown:

The using statement, followed in brackets by a reference variable declaration and instantiation, will cause that variable to be scoped to the accompanying statement block. In addition, when that variable goes out of scope, its Dispose () method will be called automatically, even if an exception occurs. However, if you are already using try blocks to catch other exceptions, it is cleaner and avoids additional code indentation if you avoid the using statement and simply call Dispose () in the Finally clause of t.he existing try block.

For some classes the notion of a Close () method is more logical than Dispose ();for example, when dealing with files or database connections. In these cases, it is common to implement the IDisposable interface and then. implement a separate Close () method that simply calls Dispose (). This approach provides clarity in the use of your classes but also supports the using statement provided by C#.

Implementing IDisposable and a Destructor

The previous sections discussed two alternatives for freeing unmanaged resources used by the classes you create:

In general, the best approach is to implement both mechanisms in order to gain the benefits of both while overcoming their limitations. You implement IDisposable on the assumption that most programmers will call Dispose () correctly, but implement a destructor as a safety mechanism in case Dispose () is not called. Here is an example of a dual implementation:

You can see from this code that there is a second protected overload of Dispose (), which takes one bool parameter-and this is the method that does all cleaning up. Dispose'(bool} is called by both the destructor and by IDisposable. Dispose (). The point of this approach is to ensure that all cleanup code is in one place.

The parameter passed to Dispose (bool) indicates whether Dispose (bool j has been invoked by the destructor or by IDisposable. Dispose () – Dispose (bool) should not be invoked from”anywhere
else in your code. The idea is this:

The IDisposed member variable indicates whether the object has already been disposed of and allows you to ensure that you do not try to dispose of member variables more than once. It also allows you to test whether an object has been disposed of before executing any instance methods, as shown in SomeMethod ( ). This simplistic approach is not thread-safe and depends on the caller ensuring that only one thread is calling the method concurrently. Requiring a consumer to enforce synchronization is a reasonable assumption and one that is used repeatedly throughout the .NET class libraries.

Posted on October 30, 2015 in Memory Management and Pointers

Commands
Memory Management Under the Hood