In C#, an exception is an object created (or thrown) when a particular exceptional error condition occurs. This object contains information that should help track down the problem. Although you can create your own exception classes (and you will be doing so later), .NET provides you with many predefined exception classes.

This section provides a quick survey of some of the exceptions available in the .NET base class library. Microsoft has provided a large number of exception classes in .NET- too many to provide a comprehensive list here. This class hierarchy diagram in Figure shows a few of these classes to give you a sense of the general pattern.

The generic exception class, System. Exception, is derived from System. Object, as you would expect for a .NET class. In general, you should not throw generic System. Exception objects in your code, because they provide no specifics about the error condition.

Two important classes in the hierarchy are derived from System. Exception: 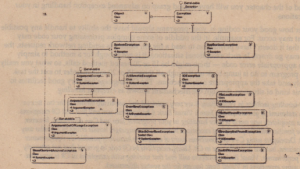 Other exception classes that might come in handy include the following:

The other exception classes shown in Figure 14-1 are not discussed here.

The class hierarchy for exceptions is somewhat unusual in that most of these classes do not add any functionality to their respective base classes. However, in the case of exception handling, the common reason for adding inherited classes is to indicate more specific error conditions. There is often no need to override methods or add any new ones (although it is not uncommon to add extra properties that carry extra information about the error condition). For example, you might have a base ArgumentException Class intended for method calls where inappropriate values are passed in, and an ArgumentNullException class derived from it, which is intended to handle a null argument if passed.

Posted on October 30, 2015 in Errors and Exceptions

The WebClient Class
Errors and Exceptions

More From ‘Errors and Exceptions’ Category: