From this book, you have seen how you can define attributes on various items within your program. These attributes have been defined by Microsoft as part of the .NET Framework class library, and many of them receive special support from the 0# compiler. This means that for those particular attributes, the compiler could customize the compilation process in specific ways; for example, laying out a struct in memory according to the details in the Struct Layout attributes.

By itself, this metadata might be useful for documentation purposes, but what makes attributes really powerful is that by using reflection, your code can read this metadata and use it to make decisions at runtime. This means that the custom attributes that you define can directly affect how your code runs. For example, custom attributes can be used to enable declarative code access security checks for custom permission classes, to associate information with program elements that can then be used by testing tools, or when developing extensible framework that allow the loading of plugins or modules.

To understand how to write your own custom attributes, it is useful to know what the compiler does when it encounters an element in your code that has a custom attribute applied to it. To take the database example, suppose that you have a C# property declaration that looks like this:

When the C# compiler recognizes that this property has an attribute applied to it (FieldName), it will start by appending the string Attribute to this name, forming the combined name FieldNameAttribute. The compiler wiIl then search all the namespaces in its search path (those namespaces that have been mentioned in a using statement) for a class with the specified name. Note that if you mark an item with an attribute whose name already ends in the string Attribute, the compiler will not add the string to the name a second time; it will leave the attribute name unchanged. Therefore, the preceding code is equivalent to this:

To continue with the example, assume that you have defined the FieldName attribute like this: 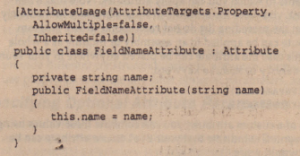 The following sections discuss each element of this definition.

The first thing to note is that the attribute class itself is marked with an attribute – the System. . ,AttributeUsage attribute. This is an attribute defined by Microsoft for which the CI#compiler provides special support. You could argue that AttributeUsage isn’t an attribute at all it is more like a meta attribute, because it applies only to other attributes, not simply to any class.) The primary purpose of AttributeUsage is to identify the types of program elements to which your custom attribute can be applied. This information is given by the first parameter of the At tributeUsage attribute – this parameter is mandatory, and is of an enumerated type, AttributeTargetl. In the previous example, you have indicated that the FieldName attribute can be applied only to properties, which is fine, because that is exactly what you have applied it to in the earlier code fragment. The members of the AttributeTargets enumeration are:

In this section, you start developing the example mentioned at the beginning of the chapter. WhatsNewAttributes provides for an attribute that indicates when a program element was last modified. This is a more ambitious code sample than many of the others in that it consists o! three separate assemblies:

Of these, only Lookup WhatsNew is a console application of the type that you have used up until now. The remaining two assemblies are libraries – they each contain class definitions but no program entry point. For the VectorClass assembly, this means that the entry point and test harness class have been removed from the VectorAsCollection sample, leaving only the Vector class. These classes are represented later in this chapter.

Managing three related assemblies by compiling at the command line is tricky. Although the commands for compiling all these source files are provided separately, you might prefer to edit the code sample (which you can download from the Csharp Web site at www.csharpaid.com) as a combined Visual Studio solution.

The WhatsNewAttributes. cs file defines two attribute classes, LaatModifiedAttribute and SupportsWhatsNewAttribute. The attribute, LastModifiedAttribute, is the attribute that you can use to mark when an item was last modified. It takes two mandatory patameters (parameters that are passed to the constructor): the date of the modification and a string containing a description of the changes. There is also one optional parameter named issues (for which a public property exists), which can be used to describe any outstanding issues for the item.

In practice, you would probably want this attribute to apply to anything. To keep the code simple, its usage is limited here to classes and methods. You will allow it to be applied more than once to the same item (AllowMultiple=true) because an item might be modified more than once, and each modification will have to be marked with a separate attribute instance.

SupportsWhatsNew is a smaller class representing an attribute that doesn’t take any parameters. The idea of this attribute is that it is an assembly attribute that is used to mark an assembly for which you are maintaining documentation via the LastModifiedAttribute. This way, the program that will examine this assembly later on knows that the assembly it is reading is one on which you are actually using your automated documentation process. Here is the complete source code for this part of the example: 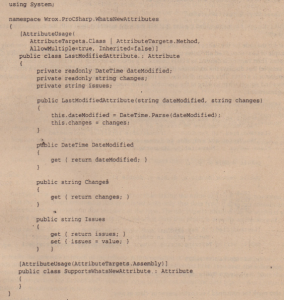 This code should be clear with reference to previous descriptions. Notice, however, that we have not bothered to supply set accessors to the Changes and DateModified properties. There is no need for these accessors because you are requiring these parameters to be set in the constructor as mandatory parameters. You need the get accessors so that you can read the values of these attributes.