First, you need to create a Windows Forms application. For the following example, create a blank form and show it on the screen, This example does not use Visual Studio .NET It has been entered in a text editor and compiled using the command-line compiler.
using System;
using System.Windows.Forms;
namespace NotepadForms
(
public class MyForm System.Windows.Forms.Form
(
public MyForm()
(
)
[STAThreadl
static void Mainl)
(
Application.Run(new MyForm());
When you compile and run this example, you will get a small blank form without a caption, Not real functional, but it is a Windows Form, As you look at the code, two items deserve attention. The first is the fact that you have used inheritance to create the MyFormclass. The following line declares that MyFormis derived from System.

Windows Forms public class MyForm: System.Windows.Forms.Form
The Form class is one of the main classes in the Systerm. Windows. Forms namespace. The other section of code that you want to look at is:
[STAThreadl
static void Main()
(
Application.Run(new MyForm());
Main is the default entry point into any C# client application. Typically in larger applications, the Main method would not be in a form, but in a class that is responsible for any startup processing that needs to be done, In this case, you would set the startup class name in the project properties dialog box, Notice the attribute [STAThreadl. This sets the COM threading model to single-threaded apartment (STA), The STAthreading model is required for COM interop and is added by default to a Windows Form project. 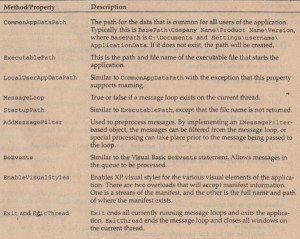 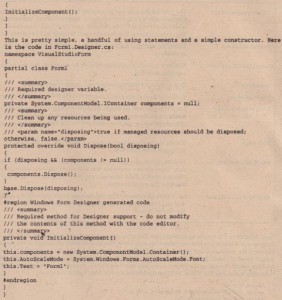 The Designer file of a form should rarely be edited directly, The only exception would be if there is any special processing that needs to take place in the Dispose method.

Looking at the code as a whole for this sample application, you can see it is much longer than the simple command-line example. There are several using statements at the start of the class; most are not necessary for this example. There is no penalty for keeping them there. The class Forml is derived from System Windows.

Forms just like the earlier Notepad example, but things start to get different at this point. First, there is this line in the Forml. Designer file:

In the example, this line of code doesn’t really do anything, When you add a component to a form, you can also add it to the components object, which is a container, The reason for adding to this container has do with disposing of the form. The form class supports the IDisposable interface because it is implemented in the Component class, When a component is added to the components container, the container will make sure that the components are tracked properly and disposed of when the form is disposed of You can see this if you look at the Dispose method in the code:

The constructor of the Fonnl class, which is in the FOrrr(. cs file, looks like this:

To add a control or component to the form, press Ctrl+Alt+X or select Toolbox from the View menu in  VisualStudio .NET Forml should be in design mode. Right-click Forml .cs in Solution Explorer and select View Designer from the context menu. Select the Button control and drag it to the form in the Designer.

You can also double-click the control, and it will be added to the form, Do the same with the TextBox control.

Now that you have added a TextBox control and a Button control to the form, initializeComponent () expands to include the following code: 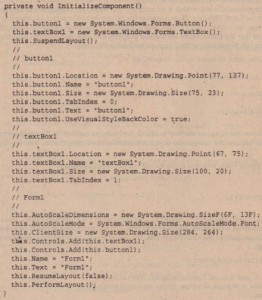 If you look at the first three lines of code in the method, you can see the Button and TextBox controls are instantiated. Notice the names given to the controls, textBox1 and buttonl, Bydefault, the Designer uses the name of the control and adds an integer value to the name. When you add another button, the Designer adds the name button2, and so on. The next line is part of the SuspendLayout and ResumeLayout pair, SuspendLayout () temporarily suspends the layout events that take place when a control is first _ initialized, At the end of the method the ResumeLayout () method is called to set things back to normal a complex fonn with many controls, the InitializeComponent () method can get quite large.

The importance of understanding the hierarchy becomes apparent during the design and construction of custom controls, If your custom control is a derivative of a current control- for example, a text box with some added properties and methods – you will want to inherit from the text box control and then override and add the properties and methods to suit your needs. However, if you are creating a control that doesn’t match up to any of the controls included with the .NETFramework, you will have to inherit from one of the three base control classes – Control or ScrollableControl if you need autoscrolling capabilities, and ContainerControl if your control needs to be a container of other controls.