You can now use the COM component from within .NET.

To make this possible, you must create a runtime callable wrapper (RCW).

Using the RCW,the .NET client sees a .NET object instead of the COM component; there is no need to deal with the COM characteristics because this is done by the wrapper.

An RCW hides the IUnknown and IDispatch interfaces and deals itself with the reference counts of the COM object. 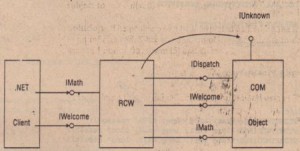 that contains a .NET assembly with the wrapper class. In this generated assembly, you can find the namespace COMWrapper with the class CCOMDemoClass and the interfaces CCOMDemo, IMath, and IWelcome The name of the namespace can be changed by using options of the tlbimp utility.

The option Inamespace allows you to specify a different namespace, and with I asmversion you can define the version number of the assembly.

Another important option of this command-line utility is /keyfile, which is used for assigning a strong name to the generated assembly.

An RCW can also be created by using Visual Studio.

In Solution Explorer, add a reference,to the COM server by selecting the COM tab in the Add Reference dialog, and scroll down to the entry COMServer 1.0 Type Library.

If the COM object should be released before the garbage collector cleans up the object, the static method Marshal.

ReleaseComObject () invokes the Release () method of the component, so that the
component can destroy itself and free up memory:

After releasing the COM object using Marshal. ReleaseComObj ect ( ), you may not use any variable that references the object, In the example, the COM object is released by using the variable math.

The variable welcome, which references the same object, cannot be used after releasing the object. Otherwise,you will get an exception of type InvalidComObjectException.

The garbage ‘collector only deals with managed memory, As you can see, with a runtime callable wrapper, a COM component can be used similarly to a .NETobject.

A special case of a runtime callable wrapper is a primary interop assembly, which is discussed next.

Posted on October 27, 2015 in Interoperability