A COM component defines the apartment model it requires by setting a configuration value in the registry. ACOM component that is developed in a thread-safe manner supports the MTA. Multiple threads can access this component at once, and the component must do synchronization on its own.

ACOM component that doesn’t deal with multiple threads requires an STA.Here, just one (and always the same) thread accesses the component. Another thread can access the component only by using a
proxy that sends a Wmdows message to the thread that is connected to the COM object.STAsuse Windows messages for synchronization.

Visual Basic6 components supported only the STAmodel. ACOM component that is configured with the option both supports both STAand MTA.

A .NET thread, by default, runs in a MTA.Youhave probably already seen the attribute [STAThread] with the Main () method of a Wmdows application. This attribute specifies that the main thread joins an STA.Windows Forms applications require an STAthread.

When creating a new thread, you can define the apartment model either by applying the attribute [STAThread] or [MTAThread] to the entry point method of the thread or by invoking the SetApartmentState () method of the Thread class before starting the thread:

Youcan get the apartment of the thread with the GetApartmentThread () method

In Chapter 24, “Inieroperabilitv,” you can read about .NET interop with COM components and mort about CQ.Mapartment models.

Earlier in this chapter, you saw the asynchronous pattern based on the IAayncR •• ul t interface. With an asynchronous callback, the callback thread is different from the calling thread. Using Wmdows Forms or
WPF,this is a problem, because Wmdows Forms and WPF controls are bound to a single thread. With every control, you can invoke methods only from the thread that created the control, This also means
that if you have a background thread, you cannot directly access the UI controls from this thread. The only methods with Wmdows Forms controls that you can invoke from a diHerept thread than the creator thread are Invoke ( ), BeginInvoke ( ), End Invoke ( ” and the property InvokeRequired. BeginInvoke () and Endlnvoke () are asynchronous variants of Invoke ( ) . These methods switch to the creator thread to invoke the method that is assigned to a delegate parameter that you can pass to these methods. Using these methods is not hat easy, which is why, since .NET 2.0, a new component together with a new asynchronous pattern wa invented: the event-based asynchronous pattern. With the event-based asynchronous pattern, t e asynchronous component offers a method with the suffix Async; for example, the synchronous m”thod DoATask () has the name DoATaskAsyilc () in the asynchronous version. To get the result information, the component also needs to define an event that has the suffix Coinpleted, for example, DoATaskCompleted. While the action happening in the .
DoATaskAsync () method is running in a background thread, the event DoATaskCompleted is fired in the same thread as the caller.

The BackgroundWorker class is one implementation of the asynchronous event pattern. This class implements methods, properties, and events, as described in the following table 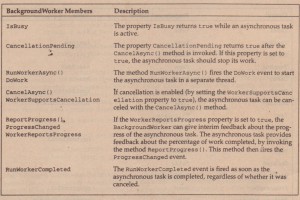 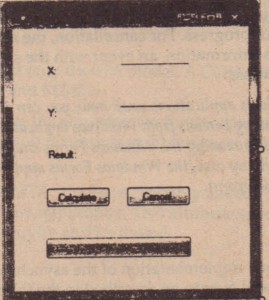 Configure the properties of the controls as listed in the following table. 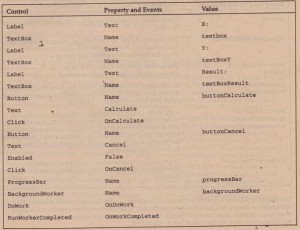 Add the struct CalcInput to the project. This struct will be used to contain the input data from the TextE\..ox controls. 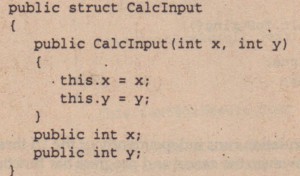 The method OnCalculate () is the event handler for the Click event from the Button control named buttonCalculate. In the implementation buttonCalculate is disabled, so the user cannot click the button once more until the calculation is completed. To start the BackgroundWorker, invoke the method RunWorkerAsync ( ) . The BackgroundWorker uses a thread pool thread to do the calculation.
RunWorkerAsync () requires the input parameters that are passed to the handler that is assigned to the DoWork event.

The method OnDoWork () is connected to the DoWork event of the BackgroundWorker control. With the DoWorkEventArgs, the input parameters are received with the property Argument. The implementation simulates functionality that takes some time with a sleep time of 5 seconds. After sleeping, the result of the calculation is written to the Resul t property of DoEventArgs. If you add the calculation and sleep to the OnCalculate J) method instead, the Windows application is blocked from user input while this is active. However, here, a separate thread is used and the user interface is still active.

After OnDoWork is completed, the background worker fires the RunWorkerCompleted event. The method OnWorkCompleted ( ). is associated with this event. Here, the result is received from the Resul t
property of the RunWorkerCompletedEventArgs parameter, and this result is written to the result TextBox control. When firing the event, the BackgroundWorker control changes control to the creator thread, so there is no need to use the Invoke methods of the Wmdows Forms controls, and you can invoke properties and methods of Wmdows Forms controls directly.

Now you can test the application and see that the calculation runs independently of the UI thread, the UI is still active, and the Form can be moved around. However, the cancel and progress bar functionality
still needs implementation.

To enable the cancel functionality to stop the thread’s progress while it is running, you must set the BackgroundWorker property WorkerSupportsCancellation to True. Next, you have to implement
the OnCancel handler that is connected to the Click event of the control buttonCancel. The BackGroundWorker control has the CancelAsync () method to cancel an asynchronous task that is going on

The asynchronous task is not canceled automatically. In the OnDoWork () handler that does the asynchroru us task, you must change the implementation to examine the CancellationPending property of the BackgroundWorker control. This property is set as soon as CancelAsync () is invoked. If a cancellation is pending, set the Cancel property of DoWorkEventArgs to true and exit the handler. 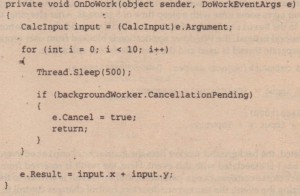 The completion handler OnWorkCompleted () is invoked if the asynchronous method has completed successfully or if it was canceled. If it was canceled, you cannot access the Resul t property, because this throws an InvalidOperationException with the information that the operation has been canceled. So, you have to check the Cancelled property of RunWorkerCompletedEventArgs and behave
accordingly.

Running the application once more, you can cancel the asynchronous progress from the user interface. 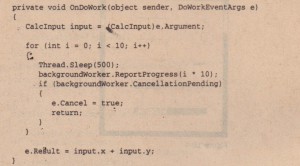 In the OnWorkCompleted () event handler, the progress bar finally is set to the 100% value: private void OnWorkCompleted(object sender,
RunWorkerCompletedEventArgs e) 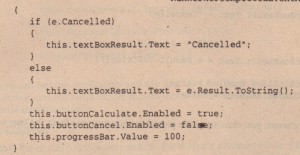 shows the running application while the calculation is just active. 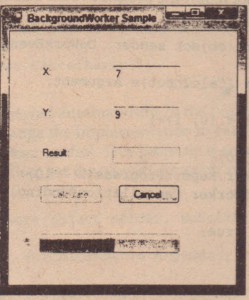 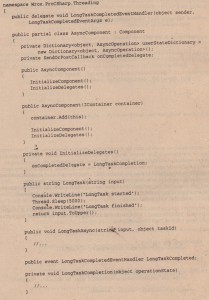 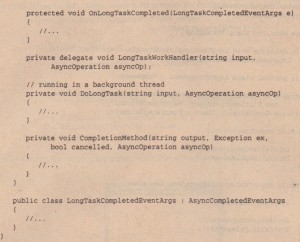 The method L.ongTaskAsync needs to start the synchronous operation asynchronously. If the component allows starting the asynchronous task several times concurrently, the client needs to have an option to map the different results to the tasks started. This is why the second parameter of LongTaskAsync requires a taskld that can be used by the client to map the results. Of course, inside the component itself the task 10 needs to be remembered to map the results .. NET offers the class AsyncOperationManager to create AsyncOperationObjectsio help keep track of the state of operations. The class AsyncOperationManager has one method, CreateOperation, where a task identifier can be passed, and an AsyncOperation object is returned. This operation is kept as an item in the dictionary user st.at eni c t icnary that was created earlier. Then, a delegate o~type LongTaskWorkHandler is created, and the method DoLongTask is assigned to that delegate instance. Beginlnvoke () is the method of the delegate to start the method DoLongTask ( ) asynchronously using a thread from the thread pool.

The delegate type LongTaskWorkHandler is just defined within the class AsyncComponent with a private access modifier because it is not needed outside. The parameters needed with this delegate are
all input parameters from the caller plus the AsyncOperation parameter for getting the status and mapping the result of the operation.

The method DoLongTask () is now called asynchronously by using the delegate. The synchronous method LongTask () can now be invoked to get the output value.

Because an exception that might happen inside the synchronous method should not just blow up the background thread, any exception is caught and remembered with the variable e of type Exception. Finally, the CompletionMethod () is invoked to inform the caller about the result. 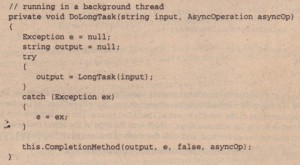 With the implementation of the CQmpletionMethod, the userStateDictionary is cleaned up as the operation is removed. The PostoPerationcompleted () method of the AsyncOperation object ends the lifetime of the asynchronous operation and informs the caller using the onCompletedDelegate method .•This method ensures that the delegate is invoked on the thread as needed for the application
type. To get information to the caller, an object of type LongTaskCompletedEventArgs is created and passed to the method PostOperationCompleted ( ) . 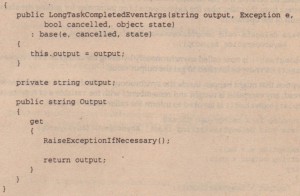 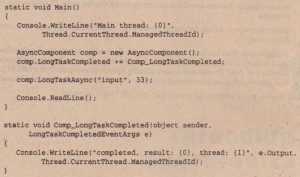 Some final guidelines regarding threading:

¤ Try to keep synchronization requirements to a minimum. Synchronization is complex and” blocks threads. You can avoid it if you try to avoid sharing state. Of course, this is not always possible.

¤   Static members of a class should be thread-safe. Usually, this is the case with classes in the .NE'( Framework.

¤  Instance state does not need to be thread-safe. For best performance, synchronization is better used outside of the class where it is needed and not with every member of the class. Instance members of .NET Framework classes usually are not thread-safe. In the MSDN library you can find this information documented for every class of the Framework in the Thread Safety section.

The next chapter gives information on another core .NET topic: security .

Posted on November 3, 2015 in Uncategorized