ClickOnce is a deployment technology that allows applications to be self-updating. Applications are published to a file share, Web site, or media such as a CD. Once published, ClickOnce apps can be automatically updated with minimal user input.

ClickOnce applications have two XML-based manifest files associated with them. One is the application manifest, and the other is the deployment manifest. These two files describe everything that is required to know to deploy an application.

ClickOnce on some limitations. Assemblies cannot be added to the GAC, for example. The following table compares ClickOnce and Windows Installer. 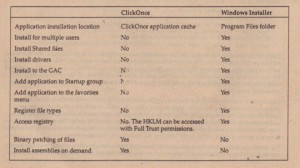 Some situations certainly exist where using Windows Installer is clearly a better choice; however, ClickOnce can be used for a large number of applications.

Everything that ClickOnce needs to know is contained in the two manifest files. The process of publishing an application for ClickOnce deployment is simply generating the manifests and placing the files in the proper location. The manifest files can be generated in Visual Studio 2008.There is also a command-line tool (mage. exe) and a version with a GUI (mageUI . exe).

In order to use the command-line tool, mage . exe, the values for the various ClickOnce properties must be passed in. Manifest files can be both created and updated using mage. exe. Typing mage.exe -help at the command prompt will give the syntax for passing in the values required.

The GUI version of mage. exe (mageUI . exe) is similar in appearance to the Publish tab in Visual Studio 2008.An application and deployment manifest file can be created and updated using the GUI tool.

The Update button displays a dialog that has the information about how the application should be updated. As new versions of’an application are made available, ClickOnce can be used to update the application. Options include to check for updates every time the application starts or to check in the background. If the background option is selected, a specified period of time between checks can be entered. Options for allowing the user to be able to decline or accept the update are available. This can. be used to force an update in the background so that the user is never aware that the update Is occurring. The next time the application is run, the new version will be used instead of the older version. A separate location for the update files can be used as well. This way the original installation package can be located in one location and installed for new users, and all of the updates can be staged in another location.

Applications distributed with ClickOnce are not installed in the Program Files folder. Instead, they are placed in an application cache that resides in the Local Settings folder under the current user’s Documents and Settings folder. Controlling this aspect of the deployment means that multiple versions of an application can reside on the client PC at the same time. If the application is set to run online, every version that the user has accessed is retained. For applications that are set to run local r; the current and previous versions are retained.

Another option is to use Trusted Application Deployment. Trusted Application Deployment is a way to grant permissions on an enterprise-wide basis without having to prompt the user. A trust license issuer is identified to each client machine. This is done with public key cryptography. Typically, an organization will have only one issuer. It is important to keep the private key for the issuer in a safe, secure location.

The installation processes discussed so far are very powerful and can do quite a bit. But there is much more that you can control in the installation process. For example, you can use the various editors in Visual Studio .2008 to build conditional installations or add registry keys and custom dialog boxes. The SarnpleClientSetupSolution example has all of these advanced options enabled.

The File System editor enables you to specify where in the target the various files and assemblies that make up the application will be deployed. By default, a standard set of deployment folder is displayed.

You can add any number of custom and special folders with the editor. This is also where you would add desktop and Start Menu shortcuts to the application. Any file that must be part of the deployment must be referenced in the File System editor.

The Registry editor allows you to add keys and data to the registry. When the editor is first displayed, a standard set of main keys is displayed:

HKEY_CURRENT_USERand HKEY_LOCAL_MACHINEcontain additional entries in the Software/ [Manufacturer] key where Manufacturer is the information you entered in the Manufacturer property of the deployment project.

To add additional keys and values, highlight one of the main keys on the left side of the editor. Select Action from the main menu and then select New. Select the key or the value type that you want to add. Repeat this step until you have all of the registry settings that you want. If you select the Registry on Target Machine item on the left pane and then select the Action menu, you will see an Import option, which enables you to import an already defined> . reg file.

To create a default value for a key you must first enter a value for the key, then select the value name in the right or value pane. Select Rename from the File menu and delete the name. Press Enter, and the value name is replaced with (Default).

You can also set some properties for the sub keys and values in the editor. The only one that hasn’t been discussed already is the DeleteAtUninstall property. A well-designed application should remove all keys that have been added by the application at uninstall time. The default setting is not to delete the keys.

One thing to keep in mind is that the preferred method for maintaining application settings is to use XML-based configuration files. These files offer a great deal more flexibility and are much easier to restore and back up than registry entries.

The File Types editor is used to establish associations between files and applications. For example, when you double-dick a file with the . doc extension, the file is opened in Word. You can create these same associations for your application.

To add an association, execute the following steps:

By default, the editor shows &Open as the Document Action. You can add others. The order in which the actions appear in the editor is the order in which they will appear in the context menu when the user right-clicks the file type. Keep in mind that the first item is always the default action. You can set the Arguments property for the actions. This is the command-line argument used to start the application. 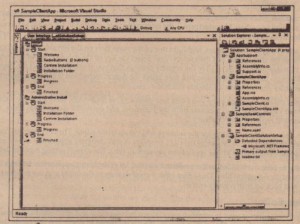 The following table lists the types of dialog boxes that you can add to the project. 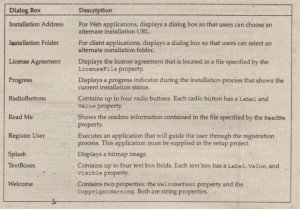 Now that you can capture some of this information, the question is, how do you make use of it? This is where the condition property that appears on most of the objects in the project comes in. The Condition property must evaluate to true for the installation step to proceed. For example, say the installation comes with three optional installation components. In this case, you would add a dialog box with three check boxes: The dialog should be somewhere after the Welcome and before the Confirm Installation dialog box. Change the Label property of each check box to describe the action. The first action could be “Install Component A,” the second could be “Install Component B,” and so on. In the File System editor select the file that represents Component A. Assuming that the name of the check box on the dialog box is CHECKBOXAl, the Condition property of the file would be CHECKBOXA1=Checked that is, if CHECKBOXAI is checked, install the file; otherwise, don’t install it.

The Custom Actions editor allows you to define custom steps that will take place during certain phases of the installation. Custom actions are created beforehand and consist of a DLL,EXE,script, or Installer class. The action would contain special’ steps to perform that can’t be defined in the standard deployment project. The actions will be performed at four specific points in the deployment. When the editor is first started, you will see the four points in the project. 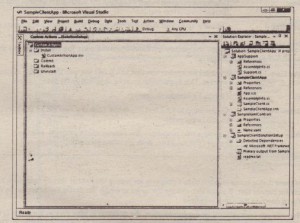 To add an action, you first select the phase of the installation in which you want the action to occur. Select the Add Custom Action menu option from the Action menu to open the file system dialog box. This means that the component that contains the action must be part of the deployment project. Because it will be executing on the target machine it has to be deployed; therefore, it should be listed in the File System editor.

After you have added the action, you can select one or more of the properties listed in the following table.

Because the action is code that you develop outside of the deployment project. you have the freedom to add just about anything that adds a professional touch to your application. The thing to remember is that such an action happens after the phase it is associated with is complete. If you select the Install phase, the action will not execute until after the install phase has completed. If you want to make determinations before the process, you will want to create a launch condition.

The Launch Conditions editor allows you to specify that certain conditions must be met before installation can continue. Launch conditions are organized into types of conditions. The basic launch conditions are File Search, Registry Search, and Windows Installer Search. When the editor is first started you ~ two groups .Search Target Machine and Launch Conditions. Typically,a search
is conducted, and, based on the success or failure of that search, a condition is executed. This happens by setting the Property property of the search. The Property property can be accessed by the installation process. It can be checked in the Condition property of other actions, for example. You can also add a launch condition in the editor. In this condition, you set the Condition property to the value of the Property property in the search. In the condition, you can specify a URL that will download the file, registry key, or installer component that was being searched for.that a .NET Framework condition is added by default.

File Search will search for a file or type of file.You can set many different file-related properties that determine how files are searched, including file name, folder location, various date values, version information, and size. You can also set the number of subfolders that are searched. Registry Search allows you to search for keys and values. It also allows you to set the root key for searching.

Windows Installer Search looks for the specified Installer component. The search is conducted by GUID. 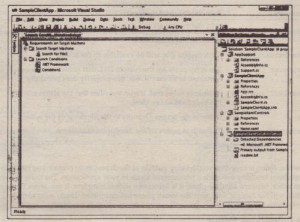