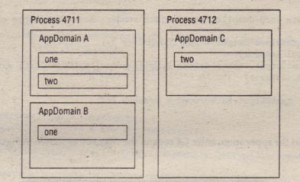 First, create a C# console application called AssemblyA. In the Main () method add a Console . wri teLine () so that you can see when this method is called. In addition, add the class Demo with a consguctor with two int values as arguments, which will be used to create instances with the AppDomain class. The AssemblyA. exe assembly will be loaded from the second application that will be created: 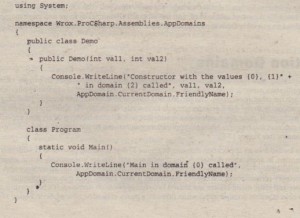 Running the application produces this output:

Main in domain AssemblyA.exe called.
Press any key to continue …

The second project you create is again a C# console application: DomainTest. First, display the name of the current domain using the property FriendlyName of the AppDomainclass. With the Crea teDomain () method, a new application domain with the friendly name New AppDomainis created. Then load the assembly AssemblyA into the new domain and call the Main () method by calling ExecuteAssembly ( ): 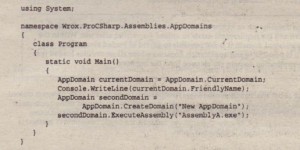 DomainTest,exe
Main in domain NewAppDomaincalled
Press any key to continue …

Instead of calling the Main () method in the newly loaded assembly, you can also create a new instance. In the following example, replace the ExecuteAssembly () method with a CreateInstance (). The first argument is the name of the assembly, AssemblyA. The second argument defines the type that should be instantiated: Wrox. ProCSharp .Assemblies .AppDomains. Demo.The third argument, true, means that case is ignored. System. Reflection. BindingFlags. Create Instance is a binding flag enumeration value to specify that the constructor should be called:

The results of a successful run of the application are as follows: 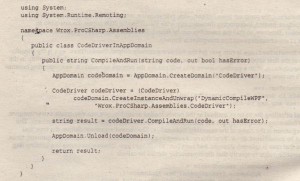 Tile class CodeDriver itself now is used both in the main app-domain and in the new app-domain, that’s why it is not possible to get rid of the code that this class is using. If you would like to do that you can define an interface that is implemented by the CodeDriver and just use the interface in the main app-domain. However, here this is not an issue because there’s only the need to get rid of the dynamically created assembly with the Dri ver class. 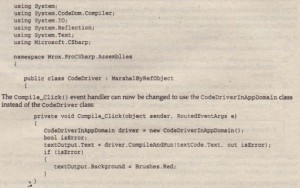 Now you can click the Compile and Run button of the application any number of times, ami the generated assembly is always unloaded.

You can see the loaded assemblies in an app-domain with the GetAssemblies () method of the AppDomain class.